India Is First Country to Ban Single-Use Plastic on Ships 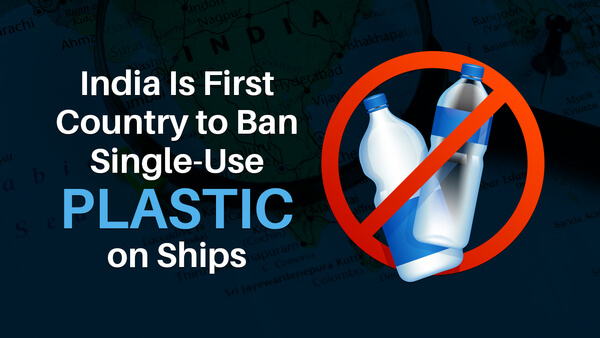 India has made a strong statement against the war on plastic by becoming the first country in the world to ban single-use plastics on ships.

Clearly though, they are not going to be the only country to take steps like this when the world is becoming more passionate about this spiraling problem. China is lined up to follow suit and this subject is up for further discussion at the International Maritime Organization (IMO) too.

Whilst the marine industry isn’t one of the main sources of the single-use plastic waste problem, it still has a part to play in consciously reducing its contribution to the issue.

The Indian ban came into effect on January 1st, 2020 and relates to any ships entering Indian waters or using Indian ports. In November 2019, the Kuwaiti Ministry of Communications also announced via Circular No. 08/2019 their new policy prohibiting certain plastic single-use items from being used on-board Kuwaiti and foreign ships.

This applies whether ships are in Kuwaiti waters or in port in Kuwait. The banned items were split into two categories – the former being banned immediately back in November, and the latter from January 1st:

Under the new rule, Kuwaiti flagged ships are completely prohibited from carrying any of the above items onboard. Where foreign-flagged ships are concerned, they are only prohibited from using these items while operating in Kuwaiti waters. They will need to lock all single-use plastic items in a store while passing through any territorial waters of Kuwait or during stays in Kuwaiti ports, and checks will be carried out by port state control.

Whilst the announcement of these policies made India’s stance on single-use plastic clear, the implementation of them was delayed to enable the shipping industry to put the logistical arrangements in place.

The Indian Directorate General of Shipping (DGS) agreed to work with the industry to establish a revised implementation schedule. In November, the DGS published an industrywide notice declaring that: “All ships including Cruise liners are permitted to operate on Indian waters till a revised implementation schedule is finalised and an Addendum to the DGS Order No.05 of 2019 in this respect is issued. All ships are also permitted to avail reception facilities for all waste including single-use plastics at all Indian ports.”

Until the revised schedule is in place, compliance must be documented during port state control or when foreign-flagged ships intend to enter an Indian or Kuwaiti port.

Both governments have stated that no foreign ships will be detained to enforce the single-use plastic prohibitions, but they stand united in no longer permitting single-use plastic items to be disposed of in any of their port reception facilities.

Ships frequently trading to India or Kuwait will need to adjust their refuse management plans to ensure single-use plastic items are discharged elsewhere. The MARPOL Annex V stipulation needs to be borne in mind too, which states that “all plastic waste generated during the normal operation of the ship is strictly banned from discharge in any waters”.

By aligning efforts with other industries to take responsibility for not being a source of the single-use plastic waste problem, the marine industry is definitely taking a step in the right direction.

The Guidelines which the IMO have adopted on single-use plastic waste recommend that “all shipowners and operators should minimize taking on-board material that could become garbage”. The guidelines also specifically recommend that, where possible, shipowners and operators must work together with the ship’s suppliers to consider the levels of refuse the procurement of products will generate.

Their suggested options are:

The growing problem of plastics in the ocean really can’t be ignored any longer. It’s a matter that will require change on a global scale from all of us whether on land or at sea and MARPOL Annex V, the international convention banning the discharge of plastic and garbage from ships, shares the degree of the problem.

We all know that the elimination of a convenience-based problem is going to be inconvenient at the very least, but these changes are healthy signals that the first steps are being taken.

DrinkSafe from Martek Marine is the easiest water testing kit on the market and is designed around MLC 2006 and WHO guidelines to provide you with everything you need to perform regular, comprehensive testing of your vessel’s water supplies. With DrinkSafe, there’s no need to use single-use plastic bottles and some of the biggest shipping companies in the world are using it to look after the safety of their passengers and crews.