What Are The Long Term Dangers Of Legionella? 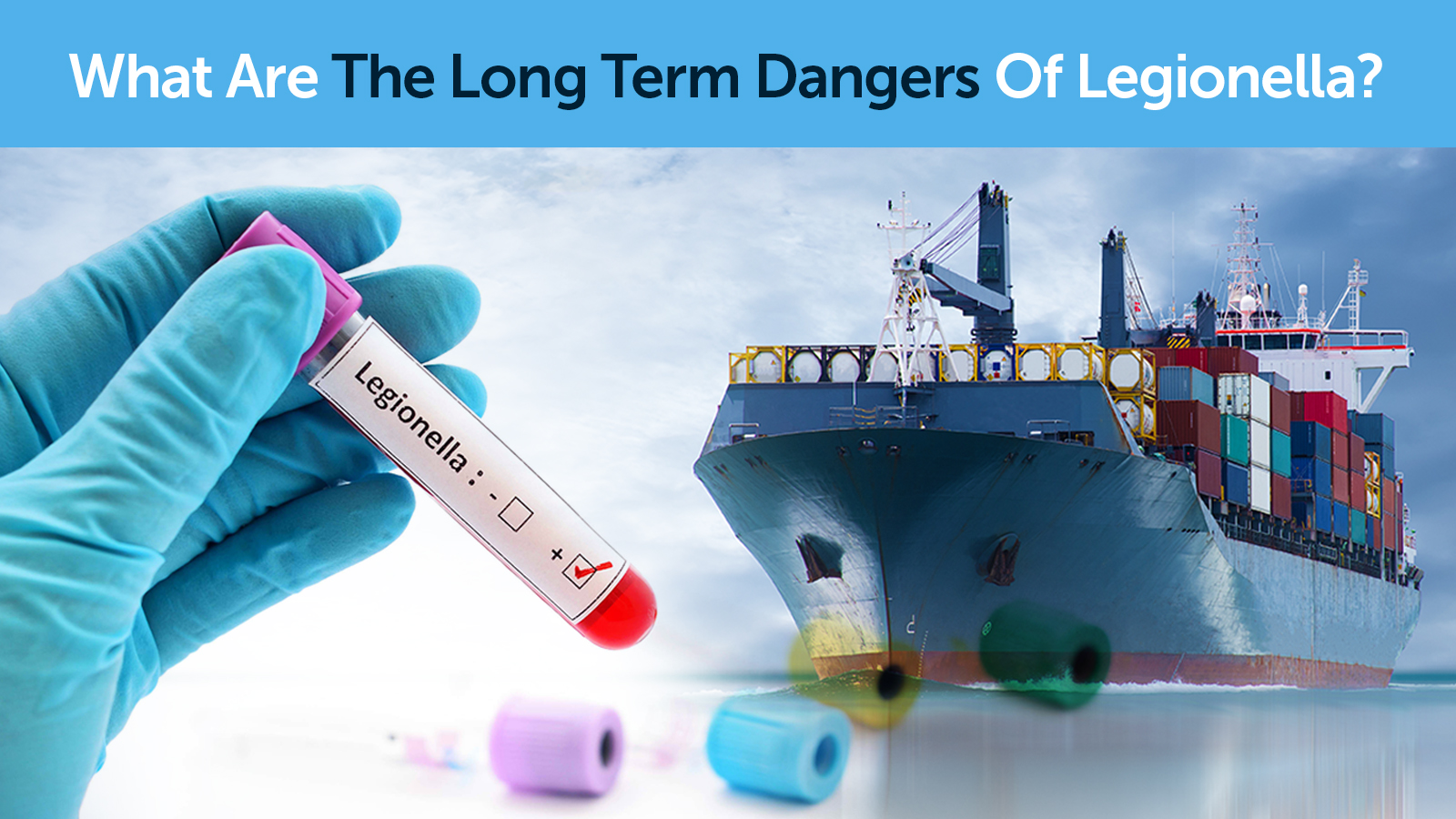 What Are The Long Term Dangers Of Legionella?

The potable water systems on ships – or drinking water systems as most of us know them as – can harbour the perfect environment for bacteria to live and grow in if not kept on top of. You may be aware of the immediate risks of Legionella, but did you know the long term impact is something you need to consider?

One of the prime culprits is Legionella. Legionellosis, which is the general term used to describe the pneumonic and non-pneumonic forms of infection with Legionella can be contracted by inhaling fine water droplets contaminated with Legionella bacteria.

In its mildest form is Legionnaires’ Disease which can cause fever-like but relatively short-lived symptoms. Most alarmingly though, it’s not unusual for those who have contracted the infection to be admitted to the intensive care unit since it can also develop into a more serious, and occasionally fatal, type of pneumonia.

It is rarely mentioned that some sufferers can also be exposed to long-term chronic health complications which affect their quality of life.

So you can understand why you don’t want to be dealing with Legionella contaminations. Even worse is that once in your systems, it’s a mammoth task to be totally rid of it so it is vital that water systems are managed carefully to mitigate exposure to legionella in the first place.

In this instance, prevention is most certainly better than cure!

What Are The Initial Side-Effects Of Legionella And Legionnaires’ Disease?

The non-pneumonic form is more commonly known as Pontiac disease and is an acute, flu-like illness that will run its course and typically lasts 2–5 days (but up to 16 days has been recorded).

The main symptoms patients will experience are fever, loss of appetite, chills, headache, and malaise. A mild case could present only as a cough, but the severity could extend to include muscular aches or pain (myalgia), diarrhoea and confusion. Whilst unpleasant for those suffering from this kind of ailment, there are no deaths associated with this type of infection.

For those who are exposed to the more serious pneumonic form of the infection of Legionnaires’ Disease,  the outcome is very positive if the patient is treated with suitable antibiotics as close as possible to the onset of pneumonia. A favourable recovery is usually made within several weeks or months. This is especially the case if they are otherwise healthy and have no underlying illnesses that impact their immune system.

It’s not quite the same story for sufferers whose immune systems are weakened or where appropriate treatment is delayed. This can result in extended periods in hospital, other medical complications, and even death as rapidly fatal pneumonia can cause respiratory failure, shock and multi-organ failure. The death rate depends on a number of factors, from 5-10% overall, but early diagnosis and effective treatment are key to a successful recovery.

What Are The Relatively Unknown Long Term Side Effects Of Legionellosis?

It is not unknown to hear stories about outbreaks of the disease and how people have died or survived the disease. It is not uncommon for survivors of legionellosis to suffer long-term effects, but the long term consequences to an individual are rarely talked about.

A study in the Netherlands tracked the wellbeing of 122 people who survived a significant outbreak which claimed 32 lives. It found that many experienced long-term conditions that lasted several months beyond their initial diagnosis, treatment and hospital discharge.

The report suggested that many experienced symptoms of fatigue, neurological impairment such as problems concentrating and malaise, and neuromuscular issues that remained for up to 17 months. Respiratory tract conditions such as cough and breathlessness were also experienced but to a lesser degree.

Fatigue was the most common long-term symptom and the study showed three-quarters of those who had Legionnaires’ Disease suffered from this over a year after first being treated. It’s certain that these symptoms are all clear risk factors for those who fall ill with this serious disease.

Two-thirds of patients reported that they experienced memory loss and a lack of concentration following their successful treatment. In addition to these neurological symptoms, 63% of participants in the study stated they also suffered from ongoing muscular aches or weakness.

Also of concern is that PTSD (Post Traumatic Stress Disorder) was also reported by 15% of those who experienced contracting Legionellosis at a younger age. PTSD, although typically associated with those exposed to traumatic situations, can also affect those exposed to a serious illness.

It is fair to attribute these persistent symptoms to the contraction of Legionnaires’ Disease since less than 10% involved in the study had major health issues prior to infection.

Evidence suggests that the most serious after-effects are rare and most patients will recover completely in time, but we do not know if the individuals under scrutiny in the report went on to experience side effects beyond the 18-month time frame of the study. However, it is likely that any side effects that continue for longer than this, could be permanent.

What Is The Impact Of Legionnaires On Ship Owners?

The risks to a shipowner vary depending on the severity of the outbreak. A minor exposure could result in the inconvenience of having crew members off sick for the duration of their illness until their condition improves. This could range from a few days to several weeks or more in some cases.

In particularly serious cases, some crew members may be left with health issues which impair their ability to carry out the full extent of their role, such as memory loss or chronic fatigue persisting for many months.

In some rarer circumstances where significant complications arise, an individual may never fully recover or even die.

Why Is It Important To Catch Legionella BEFORE An Outbreak Occurs?

Legionnaires’ Disease can be a serious and deadly illness, so it is important to prevent and contain any outbreaks before they occur.

By taking important steps to maintain the safety of all water sources, it is possible to ensure Legionella and other bacteria are prohibited from growing to dangerous levels.

There is no vaccine currently available for Legionnaires’ disease, so onboard a ship it is vital that proper vigilance on the part of ship owners to detect and stop the risks of contraction.

These control measures include sound maintenance of pipes and systems, regular cleaning and disinfection, reducing stagnation of pooled water, and applying other physical (temperature) or chemical measures (biocide) to minimise the growth of legionella.

One way of staying on top of all of this is a regular and clear testing process which is well documented. The problem is that most tests take a while to get results back from external labs so it adds extra steps into your processes which require further vigilance.

The LegionellaMAX test kit does away with all of this – as the most advanced, accurate and versatile testing technology, it can detect Legionella bacteria, both in water samples and biofilms within 35 minutes.

No formal training needed and all conducted on-site, this is prevention in it’s simplest form. Get in touch here for more information.