Greywater, Should You Be Paying Attention? 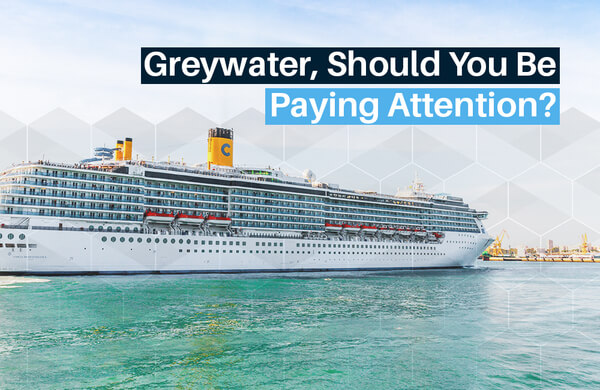 You can’t get away from the fact that we need water – and we need it to be clean to survive.

So it goes without saying that we have a duty to keep the water clean for our more natural maritime fellows too.

Water is crucial for our survival, and if you look at the processes behind ensuring water is accessible and clean on-board ships, you’ll understand its importance.

Vast quantities are used in shipping capacities – from the simpler day-to-day uses such as cooking and drinking or hold washing, through to cleaning machinery and cooling it.

There are plenty of regulations on how water needs to be treated on the way in to ensure at the very least it’s fit for purpose and safe. But how the water is used also defines which regulations it needs to comply with on the way out too.

If the wastewater contains any sewage, it is very clearly regulated under blackwater legislation, but the water used for general cooking and cleaning is a huge grey area – literally.

We jest of course, as it’s never a clear cut situation – for instance, a hazardous chemical being washed away down a sink could be a simple oversight at the time, but the impact when it is then discharged could be far more sinister to wildlife.

What about when grey or blackwater tanks become too full and the other tanks are then used for the excess? The reality is that ship operations rarely sit perfectly within all of the rules.

Greywater is now starting to get much more attention from international regulation though, so maybe it’s time to look at our processes a little more closely.

Environmental welfare is higher on the agenda than ever before – there is a growing expectation that ‘not knowing’ is no longer acceptable – we all have a part to play in operating responsibly.

Sulpher 2020  is testimony to there being a global demand for industries to respectively look at their operating models and processes – but there’s no point keeping your emissions down to save marine life if we’re then going to discharge masses of potentially harmful grey water into the ocean, simply because the regulatory steer isn’t there yet.

But it is definitely coming.

Blackwater has very clear instructions on what is and isn’t permitted, depending on your vessel size, crew size and the territory you are in.

MARPOL’s Annex IV details the regulations you’re expected to comply with, particularly within Regulation 9, and there are individual jurisdictions regulating sewage discharges around the globe too.

MARPOL may not be regulating greywater yet, but some national and state bodies are and there are a variety of rules being introduced which are changing frequently. Greywater was regulated for the first time in Alaska in 2000 under 33CFR159 subpart E, with stringent limits being imposed on cruise ship discharges.

The inland waterways in Europe (2012/49/EU), Great Lakes, US waters (EPA Vessel General Permit, 2013) are now regulating greywater treatment too. The stipulations take various shapes and forms, differing according to the shipping sector it is governing. There are currently four sets of specifications and now five varying compliance regimes which operators and equipment need to comply with.

Some countries are extending their clean water policies on land out to the maritime sector too, so greywater is currently a quagmire of rules.

Despite some opinions that the chemicals being used for cleaning, laundry, and dishwashing are as hazardous as sewage to the marine environment, there isn’t currently a single set of international rules applying to greywater.

Small aspects of it are covered such as oily wastewater produced through cleaning and cooling machinery, and the disposal of this water is regulated under MARPOL Annex I. Unregulated discharges are still vast though, such as wash water produced from scrubbers once hazardous sludge has been removed, or water used for hold cleaning and tank washing.

There has been quite an absence of greywater on the environmental radar, but it appears the collective maritime conscience is slowly starting to build momentum. Maybe the slow build-up has been due to greywater only having a tenth of the nitrogen levels and pathogens that black water possesses and decomposes far more rapidly? Despite this, the awareness of the need to own this is now growing.

Time to Clean Up

One sector very much in the greywater limelight is that of passenger cruise ships and ferries. Carnival Corp. hit the headlines in December 2019 with a further $20 million fine on top of their original $40 million fine imposed alongside their pollution conviction back in 2016.

Found to be in breach of the probation conditions to clean up, U.S. District Judge Patricia Seitz told Carnival’s Chairman Micky Arison that “she expects more concrete action and fewer promises” from Carnival. He had insisted that despite “the company doing a lot, it takes time to implement real changes at a company with 120,000 employees, more than 100 cruise ships and nine different brands”.

That may be understandable, but when you look at their activities, it’s clear that ownership hasn’t been assumed for their part in this problem, with charges being dealt for:

When it was realised that Carnival couldn’t detail what happens to around 50 million plastic bottles used on its ships each year, Richard Udell, a Justice Department lawyer who specialises in environmental enforcement, had aptly said of Carnival:

If you need any help or advice on keeping your black and grey water compliant, you can get in touch here.